“Learn to land softly and quietly” 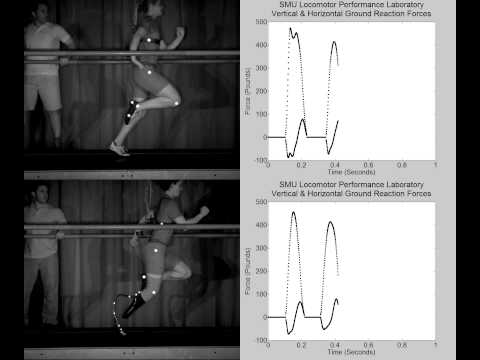 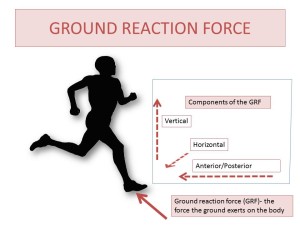 How many times have we heard that we need to teach athletes and patients to land softly from a jump or when running? How many times have we taught it? Let’s look at three well-established and accepted points before answering the ultimate question . . . will teaching athletes to land quieter cause them to run slower and/or not jump as high? Specifically:

There is a missing step in the rehab and training processes, specifically adding activities involving higher VGRF’s

It seems intuitive that decreasing the VGRF will decrease the risk of injury both when landing and when running.

From Padua and DiStefano:

We know that training can reduce VGRF when landing; also from Padua and DiStefano:

Lastly, a study published earlier this year in the American Journal of Sports Medicine found that while VGRF can indeed be decreased when landing, performance (as measured by jump height and movement speed, among other things) significantly decreased (Dai et al., 2015). We’re missing something if this indeed is our goal. 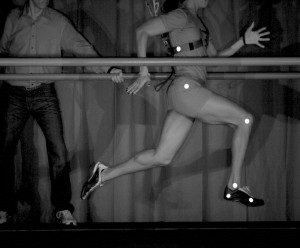 What makes athletes and patients run faster and jump higher? Understanding things like arm movement do impact an athlete’s running speed, for the purposes of this post, let’s focus only on the lower body. Peter Weyand–current Director of the SMU Locomotor Performance Laboratory–published a fascinating article in 2000 during his time at Harvard. Specifically, he and his colleagues found that running speed is primarily due to applying greater force to the ground, not the speed of swinging lower body. In fact, a faster swing phase had almost no difference in helping athletes running faster. Similar findings were recently published by French researchers. Therefore, because the ground reaction force is equal to the force applied to the ground by the running athlete, for those faster running speeds, VGRF is indeed higher.

The same finding was published last year in the Journal of Applied Physiology. The authors highlight the figure at right in concluding: 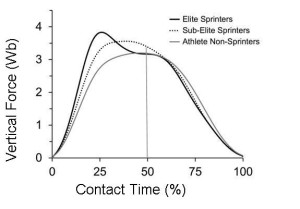 . . . the fastest sprinters apply substantially greater forces than non-sprinters during the early portion of the stance period. Consistent pattern asymmetry among the swiftest sprinters, and less pronounced pattern asymmetry among less-swift athletes lead us to conclude that: 1) the fastest athletes have converged on a common mechanical solution for speed, and 2) that less-swift athletes generally do not execute the pattern. On this basis, we suggest that the force-time pattern documented here for the most competitive sprinters in our sample constitutes a ground force application signature for maximizing human running speeds.

So, back to this:

Given this need to produce higher VGRF to run faster and jump higher, “should we do this?”**

I’m not sure this is a question that deserves a Yes or No answer. Some thoughts in an attempt to answer the question:

Ultimately, a lot remains unknown, a lot that researchers like Terry Grindstaff, Greg Myer, Bryan Heiderscheit, Nick Stergiou, and others should look at to further help our athletes return to the activities they love.

Chappell JD, Limpisvasti O. Effect of a neuromuscular training program on the kinetics and kinematics of jumping tasks. Am J Sports Med. 2008;36(6):1081-1086

*I am not sure I truly believe this, though I do agree it is a factor; from my experience, especially specific to the ACL, it is more likely unwanted–or improperly prepared for–movement in the frontal and transverse planes.

**As an aside, I am not attempting to answer the question of which is better, VGRF or horizontal forces. I think both have their place.