There was a great research study published in the most recent issue of the Journal of Orthopaedic & Sports Physical Therapy about why some people might get pain in the front of their knees.  The study highlights weakness in certain hip muscles and identifies changes that those with knee pain make . . . interestingly, some of those changes are more dramatic for females than males.  Below is a summary of the article as written by one of our students, Hannah Doenlen.  Great job, Hannah! 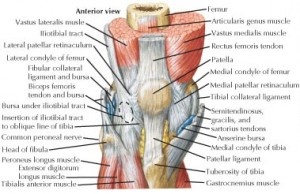 Patellofemoral pain syndrome (PFPS), is pain or discomfort at the joint between the patella (kneecap) and the femur, which can be caused by repetitive compression forces such as running or jumping, can be worsened by poor exercise or movement technique or misalignments due to muscle weakness, and can differ between males and females. This injury accounts for 25% of knee injury cases treated in sports medicine clinics and is seen in both males and females, but is much more common in females. Little has been studied about the biomechanical and functional differences between males and females with PFPS while performing sport-like movements, which could be helpful in gender-specific rehabilitation of this common injury.

A study performed by researchers from Brazil involved both male and female subjects with PFPS and age-matched control subjects without PFPS. The purpose of the study was to determine the kinematic differences between individuals with and without PFPS. A series of tests were performed to evaluate each individual’s muscular strength and movement while performing a single leg squat, as well as other muscle tests of strength. The first test involved performing a single leg squat while EMG electrodes recorded the muscle activation of the gluteal muscles. Next, the subjects performed eccentric (or lowering) hip abduction and external rotation muscle actions with an isokinetic machine to evaluate the eccentric torque and strength of the hip muscles. Lastly, the knee, hip, and trunk joint angles were measured during a single-leg squat and compared to the joint angles at standing as baseline.

Results from this study showed that both males and females with PFPS had reduced muscular strength and function and poorer technique than the controls, and that these differences in strength and technique occurred to a greater degree in females. The researchers found that female subjects with PFPS had decreased gluteal muscle activation as compared to the male subjects. Further, those with PFPS demonstrated a greater trunk lean towards the affected leg during the single-leg squat to compensate for hip weakness. It was concluded that inward deviation of the knee during the squat (which is primarily due to weak hip muscles) causes increased abnormal forces acting on the patella, therefore contributing to the onset of PFPS.

Overall, these findings suggest that there are specific gender differences associated with persons developing PFPS. The study also confirms that hip muscle weakness and poor kinematics associated with dynamic movements such as the single-leg squat are mechanisms of injury for PFPS. This study is significant in that the gender differences it showed can be used in further research and in developing preventative and rehabilitation procedures specific to the patient.