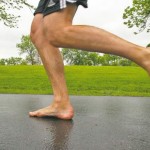 Much has been written on the benefits of barefoot/minimalist shoe running (less impact forces, improved mechanics, greater efficiency), but little has been done to examine the effects of shoes (or lack thereof) on jumping and landing.  Strength and conditioning colleagues from Cal State Fullerton sought to do just that.

In their study, 10 men and 10 women looked at impact experienced and the power produced when landing with shoes, with minimalist footwear and barefoot.  They found that the subjects generally jumped higher without shoes and had less impact forces without shoes.  Actually, quite similar results to the barefoot running research.  The conclusion of these researchers is that the cushioning provided by athletic shoes absorbs some of the force the body is attempting to produce, there by decreasing the overall amount power produced.

I like this study and generally agree with the authors’ conclusions.  However, some caution absolutely MUST be exercised when attempting this form of training.

Barefoot and minimalist shoe training sounds amazing and appears to have solid research behind its inclusion in most plans.  The downside I’ve seen, however, is that people jump on this bandwagon 100% without dipping their proverbial toes in the water first.  Stated differently, they don’t ease into this type of training, thereby setting themselves up for potential injury.  Most of us have grown up wearing shoes and have become accustomed to the support and stability they provide.  So, when transitioning to a training mode that doesn’t provide the same support, the body is at an increased risk of injury. 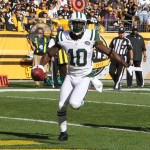 Let’s consider another example, a semi-recent injury trend in the NFL . . . there have been several Lisfranc injuries in the NFL over the past year in particular. [Lisfranc injuries are, generally, dysfunctions in the foot between the ankle and the toes, specifically, the tarsometatarsal joint. This is not a common injury.] Some have speculated that it is just a freak coincidence while others believe the game has become too fast and bodies simply cannot handle this speed.  I will offer another thought, the shoes used offer players too little support.  There is a desire to have the least amount of externally applied weight so the trend is to wear lighter and lighter shoes.  Though there is evidence to a performance benefit to both lighter shoes and minimalist footwear, my experience is that too many people are jumping into this without a proper transition.

So, how to use the research study highlighted first?  Well, I believe barefoot/minimalist training is a good thing.  And I do believe athletes are generally more efficient with lighter weight shoes.  However, the training must be such that athletes are training their bodies to be prepared to handle the stresses involved.  So go slow, incorporate SMALL amounts of barefoot training at first, gradually, methodically increase from there!